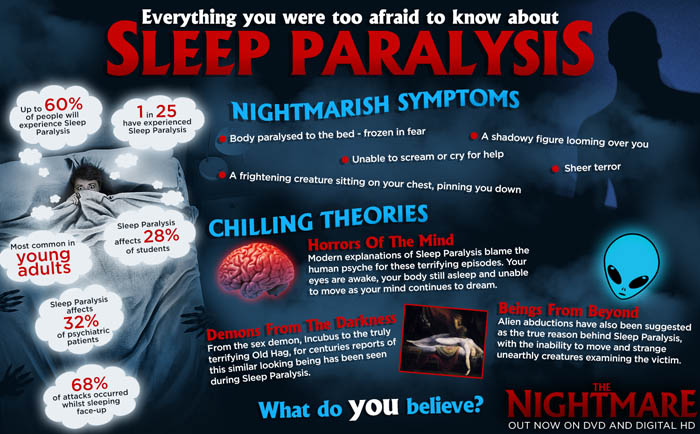 That it stands distinctively apart from its brothers, Night Terrors and Nightmares, indicates that there’s more to Sleep Paralysis than just the Hag Effect or the Incubus Effect as it is not so fondly yet aptly named. To get down to the basis of Sleep Paralysis, you might need to take a trip down bad memory lane to face the demons and clean up the closet of Sleep Paralysis. That it takes up vile names should not fall short of the gory impact considering the fact that “Hag” and “Incubus” bear the connotations of harlotry and a sex demon respectively…

What to make of Sleep Paralysis – Identifying the Hag Effect

You know you’re sleep paralyzed when the imagery of your dream life from your sleep intrudes into your waking life upon arousal for that is how sleep paralysis manifests itself. Sleep paralysis is more common amongst the Narcoleptics but not even healthy typically normal sleepers are spared from the anguish of the Incubus Effect.

As nature would so cunningly have it, dreaming typically takes place during the REM sleep phase which is associated with muscle numbness and muscle paralysis. This not being a mere coincidence but a well thought-out and calculated phenomena according to evolutionary scientists so that while in that dreaming state one does not have to practically and physically live out and act out their dreams; something that would otherwise see partners hurt their bedfellows as they hack with buckler, axe and sword the pirates in their dreams.

However, there is an exception, as is the case in Sleep Paralysis where the dreaming state in REM sleep may very well intrude the waking state thereby leading to REM sleep paralysis. The result is an encumbering discombobulating fusion of wild and vivid dream life imaginations with waking life perceptions that leave the sleeper, you guessed it, paralyzed in terror and shock. Sleep Paralysis.

What are the symptoms of Sleep Paralysis?

You don’t necessarily need to see a hag or the God-forsaken Incubus to know that you were held captive by REM sleep paralysis… Some of the most common symptoms to thus look out for include:

What is the biology behind Sleep Paralysis?

Commonly quoted is the saying that “During Sleep Paralysis, it is the mind that is aroused to an awakened state while the body remains in a sleeping state”…

You can relax and pop an Aspirin if you need to because as Biology would have it, Sleep Paralysis is apparently totally harmless and in fact just another naturally normal phenomena that occurs in the dreaming state of the sleep cycle. There should apparently be no cause for alarm unless if it is accompanied by observable symptoms of Sleep Apnea or even Narcolepsy in which case it should be a point of concern.

Relax, No, It’s NOT The Hag Or Incubus Who Paralyzed You…

You’ll be forgiven for thinking so, for when it does strike, sleep paralysis may very well leave you feeling like some supernatural being or apparition had held you captive and paralyzed…An ideology that is scientifically wrong and here’s why…

Muscle Paralysis: During your sleep in the REM dreaming state, your brain is imbued by acetylcholine, a neurotransmitter responsible for the muscle paralysis as it suppresses your muscle tone in all the primary muscle groups that are typically not part of the Autonomous Nervous System (ANS); including – your heart, the lungs, and your intestines.

The possibility of actually losing sleep or the inability to fall asleep again could very easily crop up as a result of a sleep paralysis episode, and to no surprise given the terror and shock that accompanies the unnerving sensations you’re bound to undergo during and after an attack by sleep paralysis. This would consequently lead to additional secondary sleep disturbances and sleep deprivation through induced sleep disorders like Insomnia, not to mention that the odds of experiencing another sleep paralysis attack are further increased.

Sleep Paralysis may very well be something straight out of the “Twilight Zone” as it knows no reservations in just how creepy, weird, and downright strange SP (short for Sleep Paralysis) can get… Case in point being yet another co-morbidity linking SP’s to the powerfully strong Hypnagogic Hallucinations (HH). When this combination occurs, the sleeper not only feels like they’re trapped in their own real-life episode of the “Twilight Zone” but also see themselves stark right in the middle of the goriest one.

The terrifying scenario may be summarized as follows:

It is a well known fact that an irregular erratic sleep-wake cycle is bound to cause problems in both waking and sleeping life, giving rise to common problems with sleep impairment and sleep deprivation or sleep loss.
The very same may be said of incidences of Sleep Paralysis given that an erratic, unregulated, disrupted sleep-wake cycle will easily result in REM intrusion attacks.

Other interesting factors that could easily culminate in Sleep Paralysis include:

It therefore follows that practicing appropriate Sleep Hygiene and engaging in grounding activities for relaxation of the mind, body and soul are key in curbing occurrences of SP’s. Some other tricks like wiggling your toes, clenching your fists and taking several deep and full breaths can easily shake you out of an REM intrusion, and ease the fear and tension away. Also very beneficial is the use of affirmations to speak the scary thoughts, sensations and perceptions away.