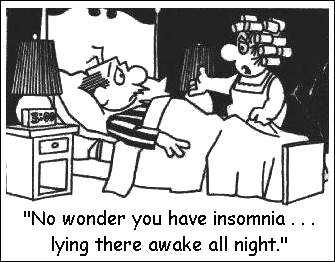 Insomnia, perhaps the most rampant sleep disorder, so prevalent is it that some don’t even know they have it, or that what they experience has a name, or that it is an anomalous sleeping condition…!

As a basic intro, Insomnia is one of the 4 most common sleeping disorders, and it symptomatically presents itself in one or all of these complaints:

In a majority of patients, Insomnia remains as a stubborn persistent problem that affects their normal functionality and productivity during the day. The symptoms present themselves at least 3 to 4 times a week, and prevail for extended periods of time, longer than 1 month, while disrupting diurnal productivity and functionality.

The occurrence of Insomnia may be independent as a primary condition that is not necessarily caused by any other condition, or co-morbid occurring alongside another medical condition such as: neurological conditions, psychiatric disorders, cases of alcoholism, drugs and substance abuse. When the patient is affected by a case of acute Insomnia it is usually linked to a predominant stressful incident or event affecting the patient and disrupting their overall well-being and functioning. In cases where no other underlying cause or contributing factor may be attributed to for the occurrence of the patient’s Insomnia and all it’s associated symptoms, the diagnosis is therefore identified medically as psycho-physiological Insomnia, also known as primary Insomnia or alternatively, idiopathic Insomnia.

Insomnia may be tested and detected using Actigraphy lab testing which entails wearing an Actigraph upon the patient’s wrist or their ankle; measurements of decelerations or accelerations in their body movements are then taken as clear indicators of their sleeping or wakeful state.

Medical professionals administering sleeping medication most commonly encounter cases of Insomnia in their practice. There are also various other sleeping disorders and medical conditions (psychiatric disorders and neurological conditions) associated with or that present Insomnia as a symptom, and careful testing, observation, and analysis should therefore be carried out for accurate diagnosis; this includes conditions such as: OSAS (Obstructive Sleep Apnea Syndrome), Anxiety and Mood disorders, ADHD (Attention Deficit Hyperactivity Disorder), Bipolar Disorder, PTSD (Post Traumatic Stress Disorder), as well as Depression.

Various scientific experiments have been shown to link Insomnia with stimulation of the brain’s preoptic region of the hypothalamus. This is one of the active regions of hypnogenic neurons for NREM sleep, the other active region being located within the brain’s medulla where the NTS (Nucleus Tractus Solitarius) is. The studies are based on the active stimulatory effects, ablations and lesions, and also recordings or the intracellular and extracellular activity of these brain regions.

Lab testing such as pulmonary functional analysis may be done to assess the diagnosis of underlying Hypersomnia diagnosis.

Hypersomnia that occurs idiopathically (idiopathic Hypersomnia) without any other co-morbid conditions may be easily confused with Narcolepsy, another sleeping disorder which entails excessive sleepiness. Though it is yet to be proven, it is assumed that the cause of Hypersomnia originates from the CNS (Central Nervous System).

Symptomatic Hypersomnia is typically syndicated with extended nighttime sleep (over 10 hours) or even normal sleep (about 6 to 10 hours): that is, Hypersomnia may occur with long sleeping time or without long sleeping time. These sleeping hours may be assessed by using sleep pattern history assessments, actigraphy, sleeping logs, and PSG (polysomnography) tests. Observations from the MSLT (Multiple Sleep Latency Tests) of Hypersomnia evidence admissible indications of pathological sleepiness but with the exception of sleep onset Rapid Eye Movement (REM).

Onset of Hypersomnia is usually seen around 15 to 30 years of age, which is much like the onset of Narcolepsy; however the two sleeping disorders differ in the nature of the sleeping pattern. In Hypersomnia, the patient is generally seen to sleep for many hours though the sleep is neither refreshing nor sufficient, nonetheless.

Because Excessive Daytime Sleepiness (EDS) is another symptom of Hypersomnia, it may be easily confused with a misdiagnosis of Sleep Apnea. Therefore the patient needs to be further assessed for the following symptoms to rule out Sleep Apnea: frequent or intermittent awakening episodes all through the night, snoring, and cataplexy. Careful diagnosis should be made for many are the cases where Hypersomnia is misdiagnosed and confused for other conditions associated with EDS.

Various sleep experts have suggested the possibility of arbitrated by Cytokine proteins (like interleukin – specifically IL-6, and tumor necrosis factor – specifically TNF-α) in both Insomnia, and Hypersomnia that is idiopathic.

It may very well be said of both Insomnia and Hypersomnia to be life-long chronic conditions that are disabling and lower the quality of one’s life. However, did you know that adjustable beds have helped many insomniac people fall asleep after many years. Check our our many adjustable bed reviews such as the Classic Brands adjustable bed review to see if it can help relieve your insomnia.

Bedroom Solutions may have affiliate relationships with other adjustable bed and mattress manufacturers and dealers also through the affiliate marketing network ShareASale.com, INC.