​​A History Lesson on Pillow Tilting

When adjustable beds were first introduced to planet earth in the 1980s, they had basically two levels of tilting. You’re right if you guessed the following two articulations:

As time went by adjustable bed users started reading, watching TV, checking email, ​doing complex math on the laptops etc. from the comfort of their adjustable beds. ​The head section of adjustable beds would typically raise about 60 degrees, but ​working on their computers and reading a newspaper was a lot easier if their heads were more upright, close to a 90 degree angle.

So people would go on and squeeze in a pillow between them and the fully raised bed which would prop them up by about 90 degrees. But the pillow wouldn’t stay in place and with time it would get squashed up or often slide down/out of place resulting in neck sprains. This is when adjustable bed manufacturers realized that there was a demand for an additional tilt near the head/neck region.

They introduced a 3rd tilt and named it ‘Pillow Tilt’ because it ​got rid of that pillow that one had to keep behind his/her head. Also, they couldn’t call this the head tilt because there already was a head tilt.

Pillow Tilt wasn’t born till about ​2015. However, ​even though this pillow tilting solved a major problem people had ​with sitting up-activities, it was far from perfect.

​The Problem with ‘Conventional’ Pillow Tilting 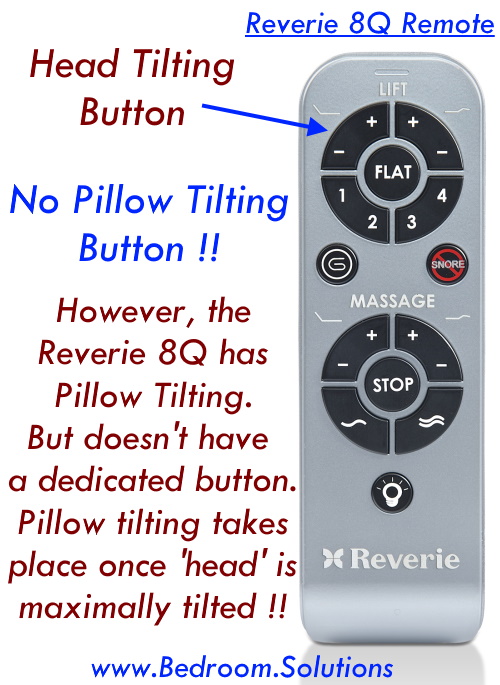 I feel bad calling it ‘conventional’ because this initial pillow tilting technology is only a few years old; but I can’t think of anything else more appropriate!

In a way, that was fine because you would only need the ​pillow tilt after the bed is raised. But there were some instances where one may need to ​raise the pillow tilting section without the bed being fully raised.

​The Birth of Independent Pillow Tilting

Adjustable bed manufacturers realized that there was a need for ‘independent’ pillow tilting and the feature was born in the year 2018​. Of course you can’t make independent pillow tilting happen by magic, so they had to introduce a separate, independent 3rd motor for this 3rd articulation!

How to spot an adjustable bed with independent pillow tilting?

But with the introduction of independent pillow tilting, the manufacturers were able to ​dedicate a button on the remote controller for pillow tilting. ​That’s why ​the best adjustable beds ​of the modern era ​come with three sets of buttons for the three levels of articulations as follows: 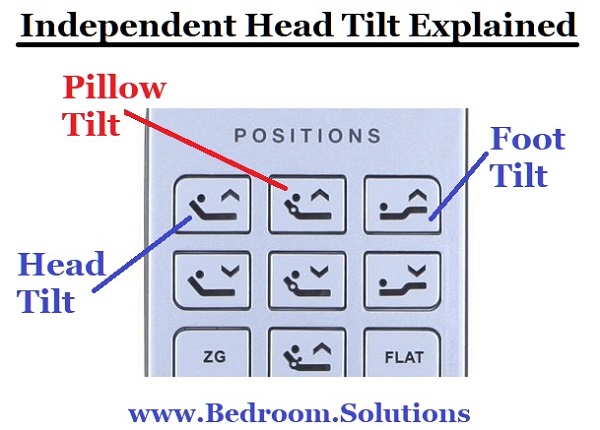 Any Drawbacks of Independent Pillow Tilting ​?

We can’t really think of one other than the extra cost you might have to bare for that 3rd motor. ​Based on the pricing on the current marketplace, the extra investment is only about $100. The feature will be worth every penny for most users because if you think about it, you’re paying pennies per night for that extra feature over the lifetime of the bed!

​Hope this short explanation helped you understand what independent pillow tilting is. ​Now you should ​be able to decide if ​it is a feature that you will have use for or not and accordingly decide ​weather you would want to invest more for that feature or not.

Don’t forget to share this post and let us know what you thought about it by commenting below.